We have many animals here in Selby from Red Fox to Woodpeckers. Unfortunately, much of their homes are being cut down to make room for houses. Here are some of our animal friends that you may see in our neighborhood.

Eastern Box Turtles are very common and a favorite among kids. The are characterized by their yellow/orange spotted shell. They are the only type of turtle that can fully withdraw into their shell. The males usually have red eyes and the females generally have yellowish brown. They are a terrestrial species that is commonly found in rich, open woodlands. During hot weather they can be found soaking in shallow water and mud in various wetlands or under cool, wet leaves. The box turtles are usually active early April to October. They can usually be found during hot weather months crossing the road to find some cool mud to soak in. Their diets include insects, seeds, berries and an occasional road kill. Ewww!
Box turtles are have an intense homing instinct. When they are removed from their location, they will return. Never remove a box turtle from their home unless there is danger like in the middle of the road in which case move them to the side they are going towards. Box turtles are also very territorial and will kill any foreign box turtle introduced in their territory. 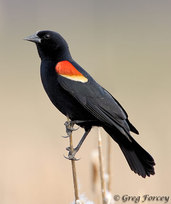 The male Red-winged Blackbird is pure black with patch of red on each wing that show when the bird flies or displays his color. The female is smaller and brownish. They are found mostly in North America and much of Central America. The young birds resemble the female. The Red-winged Blackbird migrates in single sex flocks. The males generally arrive before the females. They defend their territories aggressively against other Blackbirds, crows, Osprey, hawks and even people. They inhabit open grassy areas, but prefer wetlands and inhabit both freshwater and saltwater marshes. The Red-winged Blackbird eats seeds from weeds and insects. They nest in the cattails, rushes, grasses, sedge or in willow or alder bushes. They build basket-like nest made from grasses and mud located 3" to 14' above water.

These little fellows are all over Selby! The female has a shimmering green back and the male has red under his chin. Hummingbirds are fun to watch and easy to care for. You can find a feeder at Kmart for about $5 and making your own sugar water is easy and inexpensive. Simply heat 4 cups of water and 1 cup of sugar until the sugar is dissolved. There's no need to use red food coloring. The birds will find it and the artificial coloring isn't all that great for them.  Let the sugar water become room temp before filling the feeder. The remaining sugar water can be kept in the fridge for 2 weeks. Change the sugar water every 2-3 days and remember to rinse out the feeder really well in between changes. Sometimes it takes a while for the hummingbirds to find the feeder, but once they do they go crazy! Once you start feeding hummingbirds, be sure to continue. They will rely on the energy source. Hummingbirds are common in our area from April through October.